Discovering this earthly paradise with us…

The Amalfi Coast owes its name to its largest city center, Amalfi, UNESCO World Heritage Site since 1997. Its origin are back to Roman times, but it was from the 9th century that Amalfi became powerful. It was one of the four Maritime Republics, with Genoa, Pisa and Venice. Its power extended to the control of all Mediterranean routes: that became one of the reasons that saw many dominations in the city, which left a mark mainly on its architecture.

The cathedral of Amalfi, which preserves the relic of St Andrew, patron saint of the city, is a striking example. From its facade, numerous styles make it a unique and imposing building, which stands in the center of the square of the same name.

Walking in Amalfi still means going into narrow streets full of shops, carefully looking at the traces of the great city that was. 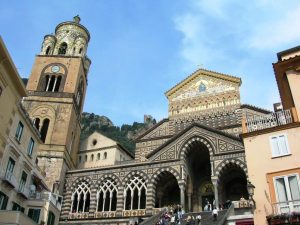 Cetara is possibly one of the most beautiful places on the entire Amalfi coast. It still retains its original appearance: a small fishing village, with narrow streets and a little port, away from the spotlight and the great mass tourism.

Nestled in a small conca, under the shadow of Mount Falerio, it is the ideal place to enjoy the sea, the sun and where you can still find traditional tastes.

Tuna and anchovies are the protagonists of the cooking tradition of Cetara, whose typical dish is spaghetti with anchovy leaking. This sauce is obtained from the fermentation of anchovies marinated in special containers and can be an evolution of Garum, the fish sauce loved by the ancient Romans. Spending a day in Cetara means feeling in full connection with the history and natural beauty that this small village still proudly preserves.

Keeping our road tour along the Amalfi Coast, you can’t help to be dazzled by the poetry of Positano. Its indisputable beauty has made it, since the time of the Romans, a summer holiday resort, as some traces – recently unearthed – still prove. Along the stretch of road that winds inside, you’ll come across narrow, articulated streets, meeting ladders that overlook striking and breathtaking views, terraced gardens, lemon-pergolas, and colorful flower spots. Walking downtown, small and colorful shops proudly show local products in an elegant setting: lemon cream and the Worldwide famous “limoncello”, white linen dresses, leather sandals made by local handcraftmen… Reaching the beach, a small cove that frames a crystal clear sea. From the beach a small path in the rock leads to other lovely coves and flanks the watchtowers, a tangible sign of the ancient Saracen incursions. That’s Positano: legend, history and enchanting beauty that kidnaps anyone who passes by. 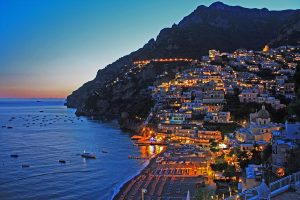 The amazing Ravello, one of the highest points on the coast, thanks to its unique beauty and stunning views have they call it “the most beautiful terrace in the world”. Ravello was founded by the Romans and became a possession of the Republic of Amalfi. Its location far from the chaos of city life, made it a place of “refuge” for many intellectuals: from Giovanni Boccaccio, who even mentioned it in the beginning of his Decameron, to Richard Wagner. The Festival of Music is just dedicated to him: annually it recalls to Ravello the highest masters of world music. Its villas have enchanted visitors for centuries, and they never stop leaving everyone breathless: Villa Cimbrione and its Terrace of Infinity, the most beautiful panorama ever, with the only sound of the waves of the sea, and Villa Rufolo, with its timeless charmed gardens, into an elegant and memorable atmosphere never met before. The “Divine Coast” is a casket of endless treasures!

You don't have permission to register